John to the seven churches which are in Asia: Grace be unto you, and peace, from him which is, and which was, and which is to come; and from the seven Spirits which are before his throne; And from Jesus Christ, who is the faithful witness, and the first begotten of the dead, and the prince of the kings of the earth. Unto him that loved us, and washed us from our sins in his own blood, And hath made us kings and priests unto God and his Father; to him be glory and dominion for ever and ever. Amen.(Revelation 1:4-6)

Much of the Bible is set in or addressed to people living in the region we now call Turkey. In our last article we looked at the region in the Old Testament, and were amazed to find that Abraham once lived there,Noah’s Ark landed there, the Euphrates rived begins there, Jacob ,Leah and Rachel lived there and most of the sons of Israel were born there!

Of course it wasn’t called Turkey until the Seljuk Turks swept aside the Byzantine hristians between the tenth and the twelfth century AD.into the region. It had alternately been called Byzantium, and before that in Biblical times, regions such as Pontus, Galatia, Lydia Cilicia,Pamphylia, 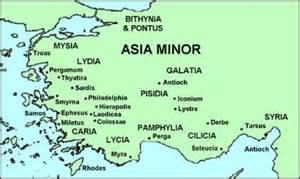 This is a significant fact to those who search the prophetic scriptures for the signs of Jesus’ coming and the events which will lead to the long prophesied “End of the Age”for the region is destined to be one of the primary players in end times events.

All of the letters to the seven churches in Revelation were sent to bodies of believers in Asia Minor(Turkey). In view of that there are a few items of significance I must point out.

In the Letter to Pergamos Jesus acknowledged that the church dwelt “Where Satan’s Throne” sat,

I know thy works, and where thou dwellest, even where Satan’s seat is: and thou holdest fast my name, and hast not denied my faith, even in those days wherein Antipas was my faithful martyr, who was slain among you, where Satan dwelleth.(Revelation 2:13)

Is there significance that there was a city in Asia Minor where of which Lord Jesus Christ himself mentioned that it was the location of the very throne of Satan himself?

When Medes and Persians conquered Babylon, in the 6th century BC, the high Priests of the Babylonian mystery religion, fled and set themselves up at Pergamos. Eventually a massive altar to Zeus was erected among the other Pagan alters and shrines in Pergamos, and it is believed that this is the altar which Jesus referred to as the throne of Satan.

Interestingly enough, in the late 19th century the German Government under the Kaiser financed an archeological expedition which excavated, and dismantled the entire Satanic altar, re-constructing it at the “Pergammon Museum” in Berlin where it has remained to this day with a few exceptions.(Think of what has happened to Germany in the years since the arrival of this “Throne”).

Another observation, Jesus told several of the churches that should they not repent, He would remove their candlestick from out of its place. Asia Minor,(Turkey) was at one time the center of the Christian world, and for a long time it was the eastern half of the Roman Empire, called Byzantium, which lasted for a full thousand years longer than the western Roman Empire .

Remember therefore from whence thou art fallen, and repent, and do the first works; or else I will come unto thee quickly, and will remove thy candlestick out of his place, except thou repent.(Revelation 2:5)

This is how the earliest center of Christianity could become almost 100 percent Muslim! Jesus warned them (and us) of the dangers of indulgence in immorality, flirting with false prophets and pagan religion, false doctrine,and lovelessness. Look at Britain and America and compare them with what they were but a short time ago.

Virtually all of the New Testament was written to Saints in what is now Turkey; Galatians, Lystra, Derbe, Iconium, the Ephesians and Collossians, First and Second Timothy, The Gospel of John, most of Paul’s missionary journeys involved Asia minor, as did the school of Tyrannus where in the space of 3 years all of Asia heard the gospel. The apostle Paul was born in Tarsus in Cilicia (southern tip of Turkey)which is also where the tomb of Daniel is said to be.Mary Jesus’ mother is buried in Ephesus, where she had lived with the apostle John.

Asia Minor was at that time the Greek world, along with the Greek islands and Paninsula which we know of as Greece today. In fact Zechariah is referring to it in Zechariah 9 when he predicts that one of the ultimate battles will be between the Sons of Zion and the sons of Javan,(translated Greece in the KJV).

Turn you to the strong hold, ye prisoners of hope: even to day do I declare that I will render double unto thee; When I have bent Judah for me, filled the bow with Ephraim, and raised up thy sons, O Zion, against thy sons, O Greece, and made thee as the sword of a mighty man. And the Lord shall be seen over them, and his arrow shall go forth as the lightning: and the Lord God shall blow the trumpet, and shall go with whirlwinds of the south. The Lord of hosts shall defend them; and they shall devour, and subdue with sling stones; and they shall drink, and make a noise as through wine; and they shall be filled like bowls, and as the corners of the altar. And the Lord their God shall save them in that day as the flock of his people: for they shall be as the stones of a crown, lifted up as an ensign upon his land. For how great is his goodness, and how great is his beauty! corn shall make the young men cheerful, and new wine the maids.(Zechariah 9:12-17)

In the first centuries of the church, the Greeks received the gospel in great numbers. The gospel steadily prevailed in spite of horrible persecution, until Constantine ‘legalized’ Christianity and established his model “Christian” city, Constantinople at the point of the Hellespont Peninsula. One of the most beautiful and massive Christian houses of worship was constructed in the fourth century in Constantinople,the church of Hagia Sophia, which exists to this day, currently being renovated by Erdogan government from a Museum to an active Mosque.

What happened to the once Christian Greek world , which turned it into the anti-Christian Muslim world?

It is beyond my current scope to offer anything but a brief overview of Turkish history, but in brief; Constantinople became a center of Christian civilization and learning, for centuries. It was called Byzantium, and for a thousand years it stood, even after Barbarians sacked Rome and Europe entered into a dark Age. Western Christianity developed under the increasing power of the Bishops of Rome, as did Eastern Christianity, under the various Metropolitans of Byzantium,(called Greek Orthodoxy).

Eventually a split occurred, which eventuated in the spectacle of the Pope of the west and the Metropolitan of the east(Constantinople) excommunicating each other, in the tenth century.

In the sixth century Islam exploded, from the Arabian Peninsula, and across the eastern Roman Empire, conquering the once classical world like a storm, in spite of Byzantine efforts to halt the spread. Furthermore, Turkic tribes from the East began pouring into Asia Minor, and taking bits and pieces of territory which had been Byzantine controlled. These Seljuk Turks readily accepted Islam’s warrior religious ethos, and had all of the fervor of the new convert.

By the time of the commencements of the Crusades, Byzantium had been severely weakened by the constant warfare waged by Islamic Arabs and their hordes, taking chunk after chunk of once Christian lands in the Middle East, North Africa and eventually incursions into Asia minor itself.Persia had become Muslim as had what we now call Iraq, Constantinople was being encircled.

At the time of the fourth Crusade of the Western Catholic Church, a rogue breakaway army of western Crusaders attacked Constantinople and sacked the city!

After the city’s sacking, a number of territories of the Empire went under the control of the Crusaders. Others formed independent states under Byzantine aristocracy, one of them being the Empire of Nicaea, which recaptured the city in 1261 proclaiming the reinstatement of the Empire. However, the weakened state would never return to its former territorial or economic status, and would eventually see all its territories in Anatolia and Southeastern Europe conquered by a rising Ottoman Sultanate, who carried out the 1453 Siege of Constantinople. For this reason, the events of 1204 are sometimes seen as marking the final stage of the Byzantine Empire’s decline.

Islam then, as now became the beneficiary of the apostasy and disunity of Christianity, or Christendom, for the weakening of the already besieged Byzantine State by Western Catholics, paved the way for the eventual conquest of all of Asia Minor by Muslims, and for the brutal five hundred year Caliphate, established upon a region which for a thousand years had been Christian.