And the rest of the men which were not killed by these plagues yet repented not of the works of their hands, that they should not worship devils, and idols of gold, and silver, and brass, and stone, and of wood: which neither can see, nor hear, nor walk:  Neither repented they of their murders, nor of their sorceries, nor of their fornication, nor of their thefts.( Revelation 9:20-21)

Here in Revelation 9 we have a listing of prominent sins of the Last days, and the warning that men will have come to the point that they simply would not ever repent of them.

The list includes Idolatry of various sorts, as well as murder, sorcery (Pharmekia), theft, and of course fornication. These are the sins which men will cling to, justify and exalt in, even through the tribulation period.

Notice that most of the detail is given to the sin of idolatry; it is called ‘the work of men’s hands”, and “the worship of devils”, as well as “idols of gold, silver and of brass…” which cannot see hear or walk.

In the events leading to the modern world, Christianity gave birth to science, because men didn’t mystify the created world, but saw it as something distinct from the Creator, and which could be studied, having been created by a logical being and according to consistent laws and ordinances. Thus modern science arose from the Christian West, not from Islamic, Hindu or the animistic world.

Eventually, with the repudiation of Christianity which intensified in the Age of Enlightenment, an ever widening chasm developed between the “intellectual class” and organized Christian religion. Science was seen as “secular” and “objective” and would eventually eliminate all “superstitions” such as those represented by the church.

This chasm really widened in the age of Darwinism, for supposed science gave men permission to cast off faith in the Creator God once and for all.

Therefore it seems counter-intuitive that the prominent sins of the very last of the last days would be headed by the sin of idolatry. What happened to bring us to this point? How is it that modern man seems to yearn for the re-erection of pre-Christian gods such as Baal and Diana of Ephesus? 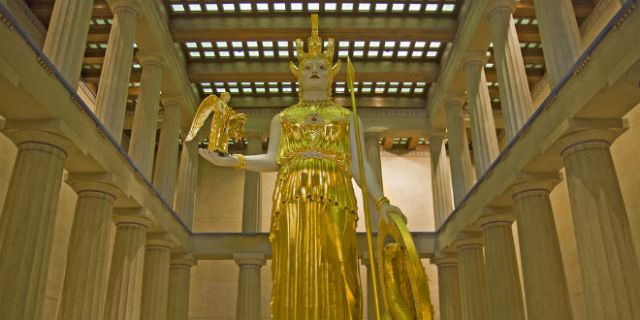 A Recreation of the Arch of Baal went on a multi city tour, having been erected in New York City, London and is scheduled to come to several other major cities around the globe.

The Image above is from Nashville Tennessee, and is a copy of a statue of the Pagan war Goddess which will be erected at the United Nations in New York City. What is this recurring fascination with ancient gods and goddesses?

Several factors are at play here.

First of all, man is incurably religious and must worship. When he rejects the knowledge of the only true God, He has a vacuum which must be filled.

Secondly these ancient gods and goddesses are “nothings” on the one hand, but on the other there is more than meets the eyes to them, because they represent very real entities.“All of the gods of the nations are Demons…”(Literal rendering of Psalm 96:5).

They stirred him to jealousy with strange gods; with abominations they provoked him to anger. They sacrificed to demons that were no gods, to gods they had never known (Deut 32:16-17)

These demons masquerading as gods,  were once banished from the Western world, and wherever else the Christian gospel was once received, but they have come back to find the “house clean , swept, garnished…” and empty. So they have gone out and gathered seven worse and are currently invading the house.

When the unclean spirit is gone out of a man, he walketh through dry places, seeking rest; and finding none, he saith, I will return unto my house whence I came out. And when he cometh, he findeth it swept and garnished. Then goeth he, and taketh to him seven other spirits more wicked than himself; and they enter in, and dwell there: and the last state of that man is worse than the first.(Luke 11:24-26)

The formerly Judeo Christian west is currently being demonized, as hordes of Mohammedans pour into cities such as London, Hamburg, Paris and New York, and calls to Allah(the Devil) are heard in the streets of these  cities in which fairly recently, church bells were heard ringing.

Thirdly, modern man is literally to the brink of openly worshipping the work of his own hands. This coming holiday season, many parents will buy for their little children, computer phones which use more technology than what it once took to get man to land on the moon! Those little hand held devices give ready access to all of the knowledge, entertainment, music, and culture(High or low) ever accumulated by mankind over the centuries.

Childen and Adults now literally hunch over these little things, organize their life around them, and have created a new protocol of human relations among themselves because of these new mass produced supercomputers. They are absolutely all consuming, in some cases, and certainly addicting.

We have a whole new vocabulary’ we “google” to solve factual arguments, we “ask Siri”, (a disembodied computerized voice), and can actually hold short conversations with Alexa(Amazon icon). All of this has swept the world in the last twenty years.

Now hard core secularized scientists in the world of internet technology are openly talking about a super computer which would become a “God” in the sense that it would solve the world’s problems and which would consist of the compilation of all knowledge accumulated. One former google exec is actually filing a religion called the “way of the Future”.

In a rare interview with Wired, his first public interview since the Waymo lawsuit, Levandowski shed more light on his new church, “Way of the Future.” Here are some highlights:

What is idolatry? It is the inverse of the scripture, “God made man in his own image…male and female created He them, in the Image of God He created them…”. If God created us, He can control us, it is His to tell us what to do, how to live and to Him we must all give account. This is the meaning of the current resistance to the doctrine of Creation in our academies. The implications of Creation are vast.

“Great and marvelous are thy Works Lord God almighty, Just and true are thy ways, O King of the Saints,Who would not fear thee and glorify thy name?  All nations will bow down and worship when thy righteous acts are revealed…” (Revelation 15)

Instead, Man would make his own “god” in his own image.This is the work of his hands.This new God will solve all of mans problems and will be something that man can turn to in his problems and sorrows, but will make few if any moral demands.

But there are a few misgivings; for example Facebook developed a set of AI Robots with a coded language, but the Robots instead developed their own language, and communicated with each other through it,  prompting the creators of these robots to pull the plug on the project.

from the article above,

Scientists and tech luminaries, including Elon Musk, Bill Gates, and Steve Wozniak have warned that AI could lead to tragic unforeseen consequences. Eminent physicist Stephen Hawking cautioned in 2014 that AI could mean the end of the human race. “It would take off on its own and re-design itself at an ever increasing rate. Humans, who are limited by slow biological evolution, couldn’t compete, and would be superseded.”

Secularity is unsustainable, man has to have a “god” to worship, and will create one of his own rather than humbly submit to the Only true God and his son Jesus Christ.

2 Responses to The Modern World; Reduced to Idol Worship…Revelation 9